Todd De Voe of Titan HST talks 5G in emergency management. Originally posted on LinkedIn, and shared with permission from the author.

In 2005, I was stoked to have my PalmOne Treo 650 PDA Phone, then I moved up to the blackberry after I crushed my phone on a deployment. Yea, I am that guy, give me something nice and I find a unique way to destroy it. So much so that my buddy that worked for a developer of gear would give me T&E gear to see if I could break it. I did not disappoint him. I digress, my point is that technology is always changing and the thing you thought was the latest and greatest is not. Hence the iPhone 11 Pro.

If you can remember the iPhone was brand new ten years ago working on a 1G infrastructure, and in fact, it was because of the iPhone we moved to 2G. As the phones became computers that you carry in your pocket, they needed faster and faster networks. Today we sit on the verge of 5G.

To understand why 5G will make a difference is it is 20 times faster than the 4G network. So if you have a full-bar connection with 4G, you get a download speed of 50 megabits per second. That 5G connection will increase that speed to 1 gigabyte per second. Qualcomm, yes the name of the old home of the Chargers, is the largest manufacturer of computer chips in the world. In one demonstration they showed 5G chips that had download speeds of 4.5 gigabytes per second. They said that that speed would most likely not be universal.

According to one report, for a full movie downloaded on 3G would take 24 hours, 4G six minutes and on 5G for about 10 seconds. Spead is excellent. However, the kicker is in the reduction of latency. Latency is the gap time between when the mobile device sends a command and when the command is received. We all can remember buffering. That is latency. Now if you are a gamer like my 17-year-old is that is cool. If you are trying to send realtime video from the scene to the EOC or ICP, that is life-changing. The idea of telemedical firms are increasing their market share should clue us in on how this will impact emergency management.

What do we know now?

AT&T wone the bit (25 years) to build First Net. Now that did not stop Verizon from getting in the game. Why does that matter? When private firms start spending their own money on a system, there is some there! Yes, capitalism works and helps out us government folks from time to time. First of all, we need to talk about The Internet of Things or IoT. Sean Griffin and I had a great conversation about the IoT on The EM Weekly Show last year. The IoT will make data flow so fast that we cannot conceive of how quickly information will be shared. Think of this way. If you were alive in 1910, and someone said that you could take a plane from N.Y. to L.A. in 5 hours, this is where we are at with the IoT.

With 5G we will have the information to make decisions faster. We will better serve our communities; we may be able to avoid another Paradise. For example, a critical capability of FirstNet and Verizon public safety program is always on priority pre-emption. Which means no matter how congested commercial cellular networks get public safety communications will always be supported first with high-speed capabilities.

Now into the future… 5G and emergency management

Emergency managers will be connected to their cities through the IoT via the smart city. When I was in Dana Point, we talked about putting up a web of internet nodes on street poles. The internet nodes were the first attempt to provide a mess network. Today, we expect to have the internet on our devices. For example, I was at an event with over 400 high school cross country teams. It was impossible to get on the internet, and the system was overwhelmed. Not with 5G and the smart city.

At Titan HST, we are building end-to-end communication capabilities that can interface with smart city infrastructure, and we have real-time video, augmented reality, and other new IoT applications. We are ahead of the curve with mess networking and making a real communications platform. With the advent of 5G, the public will expect more from their safety providers.

If you would like more information about Titan HST or 5G in emergency management, please reach to me at tdevoe@titanhst.com and take a look at our website www.titanhst.com 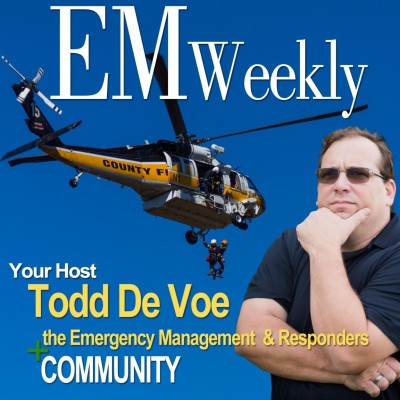